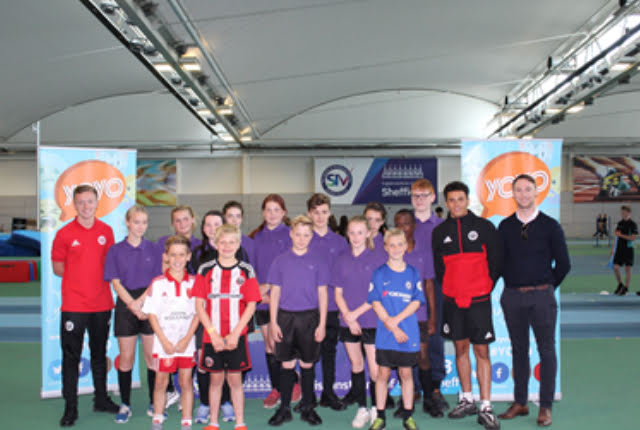 Held at the English Institute of Sport and delivered by SIV (Sheffield International Venues), the YOYO summer of sport offered the opportunity for schools in South Yorkshire to come along for the day and take part in a number of activities including fencing, shot-putting, tai-Kwando and athletics.

The sports day was attended by pupils from Outwood Academy Danum, Doncaster and Parkwood Academy, Sheffield.

Dr Alan Billings South Yorkshire Police and Crime Commissioner said: “This event was the perfect opportunity for pupils to take part in a number of sporting activities whilst understanding what the YOYO project is all about.

“YOYO stands for ‘You’re Only Young Once.’  This event provided pupils with important safety messages in innovative ways for them to share with their friends and family.

“The project has now visited 15 schools across South Yorkshire and delivered sessions on a number of subjects including sexting, domestic abuse, bullying and road safety.”

Special guests came along to the event including young professional footballers from Sheffield United, Tyler Smith and Jordan Hallam from the Under 23’s team.

Ex Premier League footballer Jamie Fullarton led on a questions and answers session for himself and the two Sheffield United footballers, explaining to the pupils the importance of studying at school even if you see yourself with a career in sport.

He said: “Sport has so many benefits in life skills, such as team-work, problem solving and self-confidence.  The skills these young people are learning today will be something to take with them throughout their future study and career paths.

“I see the YOYO project as an excellent opportunity for young people to research, learn and share their experiences, whilst offering essential advice on consequences.”

The pupils asked the special guests questions on who their favourite footballer is and where they started their careers.  Superstar footballer Lionel Messi, who was unable to attend, did feature prominently in their answers.

As the schools close for the summer break, summer schools and digital master classes are planned for which further details can be found on the website – www.yoyosyorks.co.uk